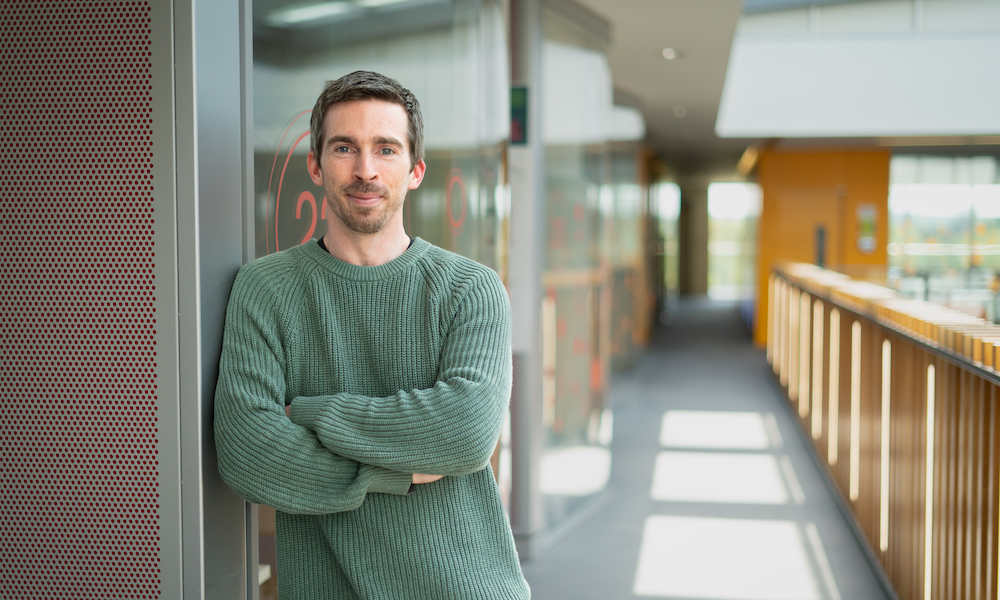 Access to accurate genome annotations and comparative genomic resources – the locations of repeats and genes in a genome and the relationships between different genomes – is a basic need for many researchers. Fergal Martin has taken on a new challenge as Eukaryotic Annotation Team Leader and in this role he will be responsible for prioritizing eukaryotic genome annotations produced by EMBL European Bioinformatics Institute (EMBL-EBI).

What is your professional background?

I started studying bioinformatics with a degree in Computational Biology and Bioinformatics, followed by a PhD in Comparative Genomics and Evolutionary Biology, both at Maynooth University in Ireland. For my PhD, I focused on how and why genes cluster in bacteria as well as how we can separate evolutionary relationships between and within different bacterial groups.

After that, I did a post-doc at Trinity College Dublin on de novo gene formation in primates. It is the process by which random mutations occurring in ancestral non-coding regions of the genome lead to the formation of open reading frames. I was trying to find examples of this; it’s a very rare event and it’s hard to say how biologically significant these things are.

I then had a brief stint as an independent game developer. I spent a year creating and publishing my own game for Android devices. It was such a fantastic and fun experience to spend time building something from scratch. It was also a great opportunity to practice programming in a very resource constrained environment. Smartphones weren’t very powerful back then and trying to create something that worked well on many different devices was a real challenge.

Finally I joined Whole within the Genebuild team, initially at the Welcome Sanger Institute. A year later, we moved to EMBL-EBI.

What does your role consist of?

I oversee eukaryotic annotation within Ensemble, so I navigate the strategic direction of the Comparative Genomics team and the Genebuild team.

The Genebuild team creates genomic annotations from genome assemblies of different species. This information is passed to the comparative genomics team who aligns genome sequences with other species to determine linkages in their genomic alignments. This team also builds phylogenetic trees to show the relationship between genes from one species to another.

I also help balance this work not only with the needs of our individual users, but with larger biodiversity initiatives like the Darwin’s Tree of Life (DToL) and the Earth biogenome. One of the things I enjoy most about this job is being part of all the different communities and consortia to help ensure that all of these high-quality genome assemblies are decorated with genomic annotations and comparative analyses, which really helps speed up downstream research.

What motivated you to work at EMBL-EBI?

From the start of my university studies, I was aware of the work that was being done at EMBL-EBI. We had a book called “Introduction to Bioinformatics” which had details of Ensembl and UniProt, and I used the resources at EMBL-EBI almost daily from my undergraduate studies until my time as a postdoc. So when I saw an opening in the Ensembl Genebuild team, I jumped at the chance to work with the people who developed these resources and help make a difference for the people who use them.

The fact that the EMBL-EBI data is open access has greatly benefited my research. The downstream achievements made possible by this open access data have a massive impact on many areas, including human health and food safety. It makes me proud to be part of this whole process.

What are some of the challenges of your new job?

A big challenge for me is trying to balance expectations; we work on many different projects and we constantly have to prioritize the data we publish. I try to find the best balance between the resources we have and make sure our users get the data they need quickly. Our work also spans many different consortia and large-scale sequencing projects, so I have to think carefully about how best to allocate my team’s resources to work on all of these projects.

What is your approach as a manager?

I like to lead by example, so I can be very involved in projects. I’m always very interested in the technical side of things and the underlying biological questions, so I tend to get involved in guiding our projects. I care a lot about the work in progress and enjoy working with my team to find new solutions and motivating them to enjoy the work too.

What’s the one thing we couldn’t find about you from an online search?

I love fencing; I am a former national champion of Ireland and was part of the Irish national team when I was younger. I still train several times a week and participate in competitions. I take it less seriously now, but it’s something I love doing and have been doing for a long time. It is a very tactical and strategic sport but also incredibly fast; you need good reflexes. The combination of physical and psychological aspects of fencing is what I really enjoy.